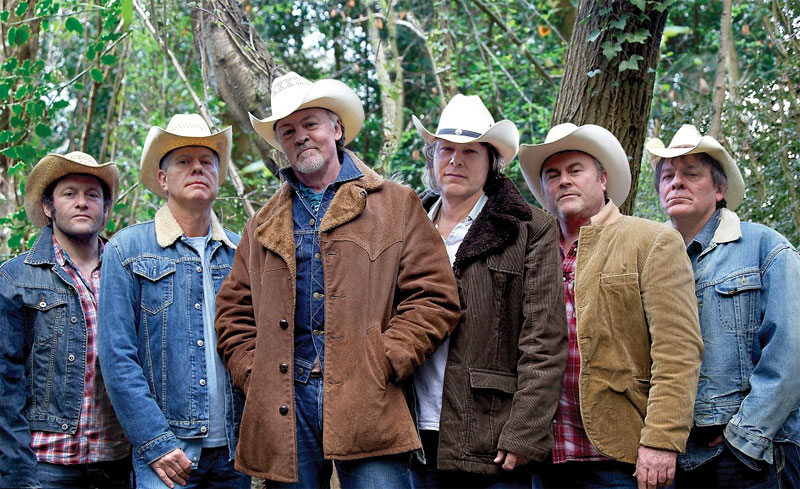 One of the UK’s most popular Live touring bands, Los Pacaminos play the very best in Tex Mex Border music from The Texas Tornadoes and Ry Cooder to Los Lobos and even Roy Orbsion.

This is a Tequila fuelled Tex Mex party night, as each venue becomes the perfect cantina setting for a great night's rocking with the cactus sharp, tequila filled, stetson wearing, magnificent 6, Los Pacaminos!!!

Los Pacaminos got together in London in November 1992, as an antidote to the bleak English winter

Originally formed as an opportunity to play their shared passion of the Border, Tex-Mex and Americana music that the members of the band love, they started as a practice band playing when other musical commitments allowed- top musicians just playing for fun. Word got around as word does and soon the band started playing gigs.

At least one member of this highly respected group will be very familiar. Los Pacaminos is fronted by one of the UK's finest and best loved vocalists - Paul Young. However, Paul is not the only luminary in this seven piece band. Some of the best musicians in the business have teamed up to present an incendiary mix of classics and original material.

Paul says - "Los Pacaminos started out just for fun, playing simply for the pleasure of it, and it just took off from there. What's really nice is that everyone else in the band can sing too, and they do, all in their own different styles. It's real bar room stuff, foot stompers, not too many slow songs - a real party atmosphere."

Tex-Mex music is somewhere between the Mariachi and Norteno styles of Mexico and the Country/Blues sounds of South-West America. The band empathises with Ry Cooder, Flaco Jimenez, The Texas Tornados and Los Lobos. Mix that together with blues, rock 'n' roll and a hint of South American music and you have Los Pacaminos. Their set includes songs like 'Wooly Bully', 'La Bamba' and sometimes, if enough tequila is flowing, even 'Speedy Gonzales'.

The Band members are some of the best known names in the music industry, from a variety of backgrounds. They've covered all kinds of music, but the unifying factor is that they all have played in Paul Young's bands through the 80's and 90's. Their friendships stretch back 20 to 30 years, and it's these long term connections that underpin the very special atmosphere generated at a Los Pacaminos show. Members of the audience are often invited onstage to join the guys in a slug of Tequila.

You'll be in good company, so put your blues on cruise and come join the Tex-Mex party