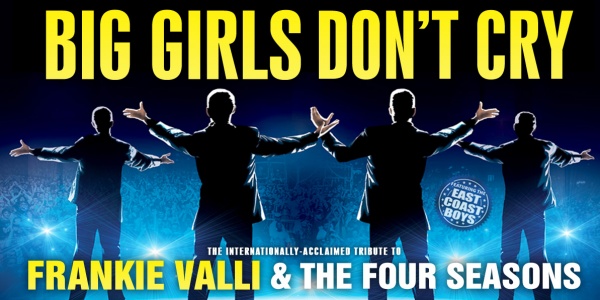 FEATURING THE EASTCOAST BOYS. CELEBRATING THE MUSIC OF FRANKIE VALLI & THE FOUR SEASONS

Celebrating a decade of Big Girls Don't Cry featuring The East Coast Boys Step back in time, to the era of romance. Where gents were gents, and gals were gals! Come and experience the iconic sounds of Frankie Valli & The Four Seasons authentically recreated by a phenomenal cast and live band. During the sixties and seventies number one hits Sherry, December 1963 (Oh What a Night) and Big Girls Don't Cry helped propel the Four Seasons and Frankie Valli to stardom. After selling an incredible 100 million records worldwide, there's a Four Seasons song that shares a special place in everyone's heart. This internationally acclaimed show authentically revives the sublime harmonies of New Jersey's finest. This is a tribute show and is no way affiliated with any original artists/estates/management companies or similar shows.