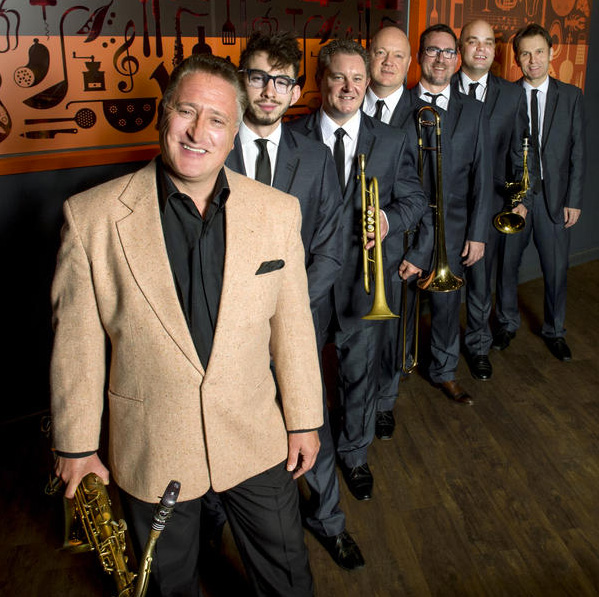 The band has 10 albums to their name and continue to work at sold out venues all over the world.

"Not for nothing is Gelato known as The Godfather of Swing, a sheer delight" - Daily Telegraph
"Awesome band"- Van Morrison
"He plays what he means and he means what he plays"- Jools Holland

Ray Gelato is credited for helping kick off the Swing revival in the early '80s. This interest in vintage Swing/Jazz and R&B went massive in the '90s, spreading all over the US, and spawning bands like The Brian Setzer Big Band and The Cherry Poppin’ Daddies to name but a few.

Ray started playing the tenor sax in 1979 and learned initially by playing along to his Dad’s old Rock'n'Roll records. He diligently learned the solos of such greats as Bill Haley’s sax player Rudy Pompilli, and Little Richard's sax man Lee Allen and was gigging within six months of owning a tenor sax! Playing the Rock'n'Roll and Blues circuits, he credits this training ground for him developing a huge sound on the tenor and realizing that your tone is your trademark.

His interest in music soon developed beyond R&B and Rock'n'Roll into really studying the jazz greats such as Ben Webster, Coleman Hawkins, Lester Young and many more. He numbers amongst his strongest influences, Illinois Jacquet, Gene Ammons and Coleman Hawkins. However, Ray still recognizes the importance of those early Rock'n'Roll / R&B sax greats, and always keeps a part of them in his playing, up to this day.

Ray is proud to have been a part of the vibrant London club scene of the early to mid 1980's. Fronting the highly successful band The Chevalier Brothers gained him great experience working before an audience.  At their peak, The Chevalier Brothers were playing around 200 shows a year ! It was in this band that Ray developed his distinctive, Louis Prima  influenced vocal style that people still love to this day.

Respected Jazz critics such as Jack Massarik (Eve Standard), Clive Davis (The Times) and Martin Chilton (Daily Telegraph) have given Ray very high accolades about his ‘Swing based' saxophone playing, giving special note to his sound and phrasing and also to his original, swinging vocal style .

Ray has had a fruitful career and has been fortunate to have worked with many greats in this business including, Sam Butera, Scott Hamilton, Al Grey ( Count Basie), Buddy Tate, Van Morrison, Al Casey (Fats Waller).

Ray and his acclaimed band The Giants have been a favourite at the world-famous Ronnie Scott’s Jazz Club in London, holding down a 16 year residency over the Christmas period.

Personal highlights of his career include playing Umbria Jazz in Italy 9 times! The Montreal Jazz Festival, Carnegie Hall, The Blue Note NY, The Lincoln Center NY and Sir Paul McCartney’s wedding. He has also opened for Robbie Williams at The Royal Albert Hall and performed on two occasions for HM The Queen.

A recent very successful collaboration with the wonderful Claire Martin O.B.E. is continuing in 2019, touring U.K. theaters in a show entitled  Let There Be Love.

But the main event in 2019 is the celebration of 25 years of the "Giants" band, with the release of a 25th anniversary live album ( on both vinyl and CD ) to come later this spring, along with many special shows, including a return for a 5 night residency at the Blue Note Jazz Club in Milan in February, plus numerous UK and European dates throughout the year.