ALVIN as ELVIS live in the Moldy Fig 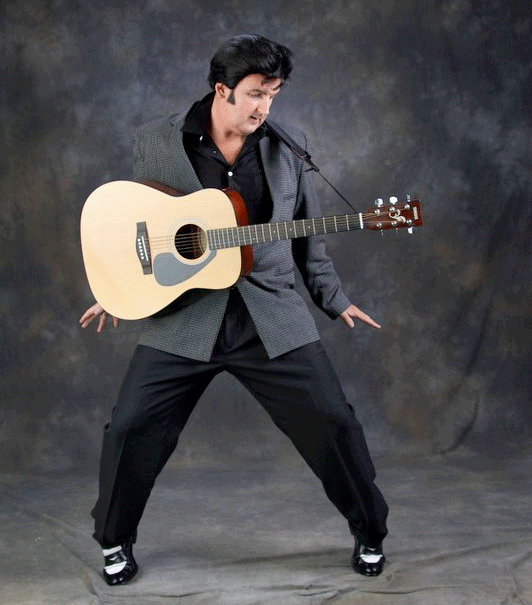 One of the best entertainers around! If you have never seen him, you've missed

Although it sounded like a zoo burning down, the very first time that I sang "Are You Lonesome Tonight?" and "Teddy Bear" at California Cliffs Holiday Park in Great Yarmouth, I knew I wanted to go into show business and for Christmas 1972 , my parents bought me my first guitar.

I formed my first band "Capacity Crowd" in 1974.  Due to musical indifferencies, Capacity Crowd split in 1981, with the band wanting to take a more musical route and me, well, I wanted to take more of a cabaret step forward, hence later that year the formation of "The Itsy Bitsy Band", a comedy show band, pictured here in 1985.

For 9 years, the "The Itsy Bitsy Band" toured all over the world, performing in hotels, holiday centres and also to HM Forces. As time went by, with the continual demand and requests for my "Elvis" sector of the show, it became apparent that this would be my next step forward, so in 1990... "Alvin, the ultimate Elvis tribute" was born.

"Alvin - the ultimate Elvis tribute" is great fun to do and having been an avid Elvis fan since the age of 12, it is a great honour for me to get to play my hero at least 3 or 4 times a week.