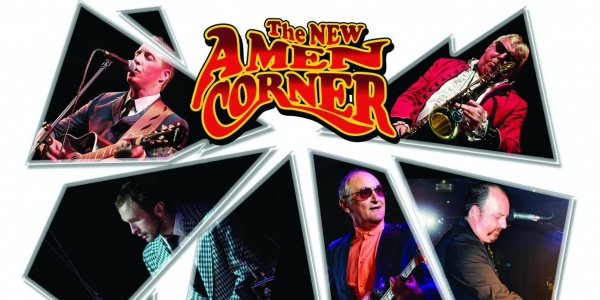 The new Amen Corner have emerged in the last couple of years as arguably the hottest band on the 60’s circuit. The band has an unrivalled ability to so perfectly recreate the sound and atmosphere of that momentous period 50 years ago when music sent good vibrations across the world.

The original Amen Corner was one of the biggest influences on the sixties pop scene to ever come out of Wales. Creating their own unique brand of music, a mixture of mod, psychedelic power pop, heavy horns, swirling Hammond organ and distinctive voice of Andy Fairweather-Low, their power house live show made them one of the most exciting bands around at the time.

With million seller hits like "Gin House”, "Bend Me Shape Me”, "If Paradise was half as Nice”, "High in the Sky”, & "Hello Suzie” they soon became a household name in the late sixties. Unfortunately, due to the bands premature demise at the end of 1969, the legacy of this truly great band had become somewhat forgotten.

The musicians of the New Amen Corner have a musical pedigree second to none and have been band members with the likes of Screaming Lord Sutch, The Symbols, Jeff Beck, Alexsis Korner, Roy Wood, Robert Plant, Alvin Stardust, Ruby Turner, Mike Oldfield and Jaki Graham to name but a few!

The reputation that the band has built of the past ten years has seen them take the stage with such sixties icons as Wayne Fontana, Steve Ellis, Cliff Bennett, Mike Pender, Brian Hyland, Chip Hawkes, Tony Crane, Peter Noone, PP Arnold, Chris Farlowe and Mike d’Abo.

ATOMIC JONES
Get ready to Kiss and Fall In Love with The Boy From Nowhere!

This truly outstanding concert production celebrates the man, the music and the voice of one of the greatest singers of our time, Sir Tom Jones.

Together with West End Star Glen Leon’s astounding vocal likeness and powerful range, a band of gifted musicians and superb backing singers, this highly acclaimed show takes you on a wonderful roller coaster ride through five decades of hit’s including; It’s Not Unusual, Green Green Grass of Home, Sex Bomb, Fall in Love, Kiss, Thunderball, She’s A Lady, What’s New Pussycat, and many many more.

Exceeding expectation wherever it plays My My My Delilah delivers on every level.