SO SINATRA live in the Moldy Fig 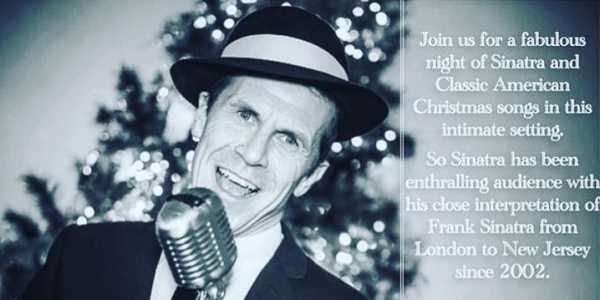 Our Christmas Party Nights run from 27 November to 23 December and promise a truly unforgettable celebration. You’ll enjoy a delicious three-course meal with first-class entertainment from our tribute artistes

That is for you to decide but Paul Holgate has been enthralling audiences with his amazingly close interpretation of Frank Sinatra since 2002.

In that time he has performed his So Sinatra show at over 1000 Weddings, Birthday parties, Anniversaries, Corporate events, Charity balls, Golf Club Dinners, Restaurant openings and events including venues such as Hampton Court and Chelsea Flower shows, Wentworth ‘Lunch for life’, Dorchester Penthouse and Ballroom, The Grosvenor, Savoy, Landmark and Ritz-Carlton Dubai.

Unlike many other classic ‘Sinatra Tribute Acts’ singers on the circuit Paul try’s very hard to make every song sound as near to the Frank Sinatra original recording. ‘As a long term fan of Sinatra I want to give the kind of show that I would want to see myself, with the correct phrasing, breath control and nuance, as surely that was what all the fuss was about in the first place, to call it a ‘Sinatra Tribute’ without these elements is just singing the songs, lazy and for me as a true Sinatra fan a waste of my money’

Paul also stays in character when he speaks and interacts with the audience. ‘Again it’s all part of the act and allows the audience to suspend their disbelief plus is a helluva lot of fun too!