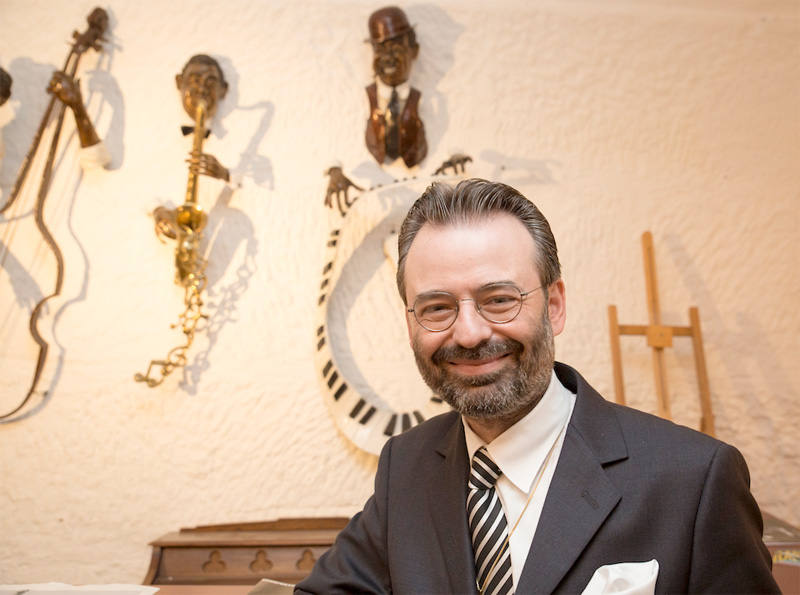 Award-winning jazz pianist Rossano Sportiello was born in Vigevano, Italy on 1 June 1974. He began studying the piano at the age of 9 under the tutelage of Italian classical pianist Carlo Villa and continued until his graduation in classical piano from the Conservatory in 1996. By the age of 16, Rossano was performing professionally at jazz venues in the Milan area. In 1992, he joined one of Europe’s historic jazz bands, the “Milano Jazz Gang” touring with the group throughout Italy and West Europe until the end of 2000. In the same year, Rossano met legendary jazz pianist and educator, Barry Harris, who became a mentor and good friend. Mr. Harris has touted Rossano as “the best stride piano player” he has ever heard and on several occasions has invited Rossano to perform during his own performances.

Stylistically, although international critics consider Rossano a follower of Ralph Sutton, Dave McKenna and Barry Harris, the influence of other great masters can be heard in his playing, such as Fats Waller, Teddy Wilson, Art Tatum, Count Basie, Earl Hines, Ellis Larkins and Bill Evans, to name a few. Rossano was introduced as a soloist by trombonist/arranger Dan Barrett and drew international acclaim at the 2002 Ascona Jazz Festival (Switzerland) while performing with the eight-piece, all-star American band led by Barrett, which was enthusiastically received by the audience and critics alike. Rossano has performed several times at Ascona since and standing ovations after his performances are not uncommon. In July, at the 25th anniversary of the festival, Rossano received the 2009 Ascona Jazz Award in recognition of his expertise and mastery of jazz piano, in particular stride piano. Rossano made his first trip to the U.S. and was introduced to the American audience at the invitation of Mat Domber (Arbors Records) to perform at the 2003 “March of Jazz” party in Clearwater Beach, Florida. Following his marriage to American writer, Lala Moore, in 2007, Rossano established himself in New York City.

Rossano has recorded four solo piano CDs, including In the Dark (2004, Sackville); Piano On My Mind (2005, Jazz Connaisseur), which won the “Prix Du Jazz Classique de l’Académie du Jazz de France”; Heart and Soul (2006, Arbors Records), selected by the French magazine Jazz Classique among the top 10 of the year; and most recently, It Amazes Me (2009, Sackville). Rossano recorded two duet CDs with bassist/singer Nicki Parrott on Arbors Records, Do It Again (2009) and People Will Say We’re In Love (2007), which was selected by The New Yorker magazine as one of the top 10 jazz CDs of 2007. Rossano also has three jazz CDs featuring classical music, Chopin in Jazz (2010, SwingBros), Schubert in Jazz (2011, SwingBros) and Listz in Jazz (SwingBros)