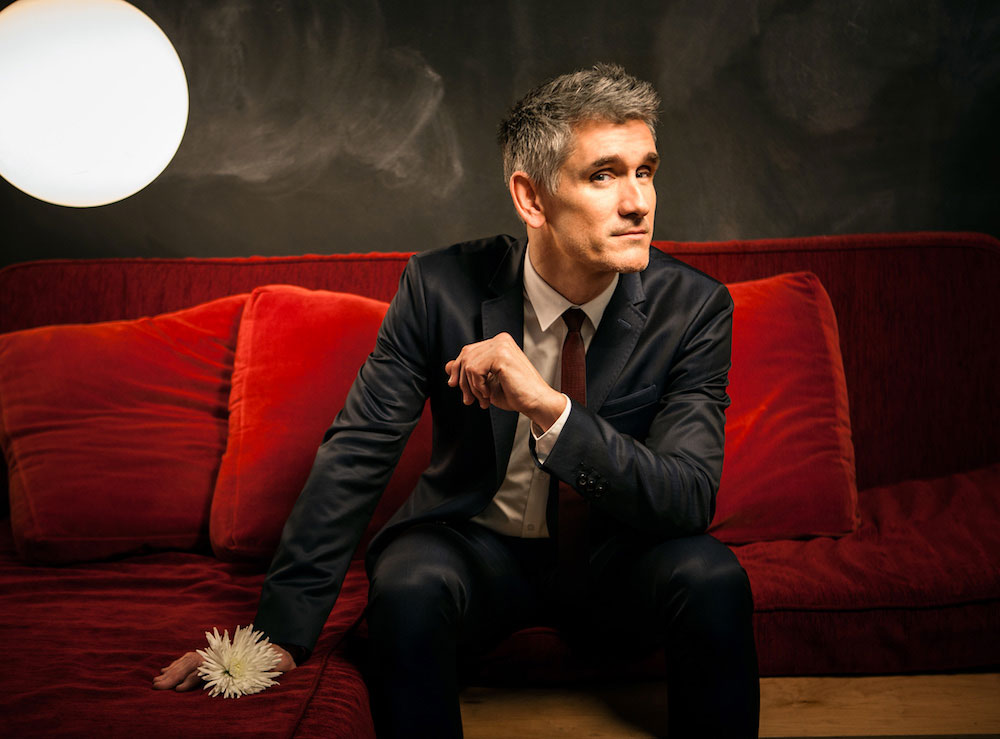 Back by very popular demand!

“Rock ‘n’ roll and jazz share so many of the same artistic bloodlines that it’s remarkable the two don’t fuse more often into the kind of inspired marriage of visceral clout and intellectual savvy conjured by the singer, songwriter and saxophonist Curtis Stigers.” – The New York Times

Given his string of hit singles, millions of records sold and a 23-year recording career that has touched every continent and nearly every genre, one might expect Curtis Stigers to be either very rich or very tired.

But mostly, Stigers is busy. The energetic singer/songwriter/saxophonist regularly barnstorms concert halls, festivals and clubs everywhere from Moscow to Manhattan, accompanied one night by his quartet, another by big band or orchestra. He has released new work nearly every year since he started recording, frequently collaborating with his musical heroes. Along the way, this musician who began his career playing standards in a Boise hotel lobby while moonlighting as drummer in a punk rock band has redefined the constitution of contemporary jazz.

“I was the kid who worshipped songs and the musicians who made them,” he remembers. “Back then, pop radio played everything from Aretha Franklin to Led Zeppelin, Marvin Gaye to Willie Nelson. I loved it all.” With Hooray For Love, his latest release for the Concord Jazz label, Stigers continues to fulfill a promise made to a younger version of himself: a commitment to artistic growth, and to bringing new tunes to the Great American Songbook.

Often euphoric and always elegant, the songs of Hooray For Love dart easily between standards and songs that perhaps should be. Like Sinatra and Nat “King” Cole, Stigers possesses a curator’s knack for hearing a song, framing its heart and making it his own, be it the work of Gershwin, Jerome Kern, Wilco or The Kinks.

But Stigers’ repertoire is not so much eclectic as it is a reflection of his appreciation for the fundaments of tone and craft, for quality. (He credits his mentor, the late soul jazz pianist Gene Harris, for his first lessons in the art.) Though much has been made of Stigers’ perceived transformation from pop to jazz artist, in retrospect the progression of his work seems both organic and practical. “Pop used to be jazz. Jazz has always been about reinvention,” Stigers notes.

Much more telling is the distinction between his latest effort and the previous release Let’s Go Out Tonight, recorded towards the end of a marriage of two decades. On that record, produced by Larry Klein, the singer chose darker material by Dylan, Crowded House and The Blue Nile. The result was a scintillating collection that represents some of the most innovative vocal jazz in a decade.

Stigers’ new release is decidedly more upbeat, which he says he owes to a newfound love, but his ability to interpret work from seemingly disparate sources — here, “You Make Me Feel So Young” follows a song written by country artist Steve Earle — is still on display. Classics like “The Way You Look Tonight” and “Love Is Here To Stay” are taken for a spin; Earle’s “Valentine’s Day” serves as both apology and pledge; the album’s title track seems destined for the first dance at many a wedding.

Throughout, Stigers makes it all look easy. “Hooray For Love is the embodiment of what happens when everything works,“ raves Critical Jazz. “Nothing short of amazing.”

Perhaps because he has penned so many notable songs himself, as well as writing with the likes of Carole King and Barry Mann, Stigers has come to recognize the small, perfect things that are a great melody and lyric, and how to capture them on paper and on tape.

But it is his rich singing voice — singular, balletic, at turns mournful and playful — that has landed him on records with the likes of Al Green and Shawn Colvin, in studios with venerated producers like Larry Klein, Danny Kortchmar, and Glen Ballard, and onstage with a plethora of legends, including pop and rock greats Eric Clapton, Elton John, Bonnie Raitt, Rod Stewart, and The Allman Brothers, and jazz giants Nancy Wilson, Al Jarreau, Gerry Mulligan, Randy and Michael Brecker, Chuck Mangione, Toots Thielmans, Wynton Marsalis, Diana Krall, and many more. The voice, of course, is the thing: hearing Stigers’ confident, nuanced delivery is akin to seeing a celebrated actor lose himself in a role.

That talent was recognized early on by music business impresario Clive Davis, who signed Stigers to a record deal after seeing him in a New York dive. A debut album sold over 1.5 million copies worldwide on the strength of self-penned hit singles like “I Wonder Why,” “You’re All That Matters to Me,” and “Never Saw a Miracle.” A year later, Stigers contributed a cover version of Nick Lowe’s “(What’s So Funny ‘Bout) Peace Love and Understanding” to The Bodyguard Soundtrack, which sold over 40 million copies worldwide.  Multiple appearances on The Tonight Show, David Letterman, The Today Show, and countless international TV shows, put Stigers directly in the spotlight of popular culture.

More accolades followed. Stigers’ 2003 release You Inspire Me was The Sunday Times (UK) Jazz Album of the Year; in 2007 BBC Radio 2 awarded him Jazz Artist of the Year. In 2010 and 2013, Deutsche Phono-Akademie named Stigers International Male Jazz Singer of the Year at the Jazz Echo Awards; he received an Emmy nomination for “This Life,” a song he co-wrote and sang for the popular television show Sons of Anarchy.  Stigers also recently recorded a duet of Cole Porter’s classic “Well Did You Evah” with Family Guy creator/actor/producer Seth MacFarlane and the John Wilson Orchestra, and he made a cameo appearance in MacFarlane’s movie Ted.

But Stigers seems to be the rare artist who has not allowed his success to influence his artistry, or his sense of self. Born in Hollywood, raised in Boise, and transplanted to Manhattan, he now resides, between gigs, in his hometown back in Idaho, a place where he says he can can raise his daughter and “live a real life.” Here, between blue mountains and green fields, Stigers is able to write and discover the songs he wants to sing.

“I’ve made a conscious decision throughout my life not to be confined, musically,” says Stigers. “For me, it’s all about the song, about the story. The last record told a love story, and it had a sad ending. On this record, the story is a new romance.”