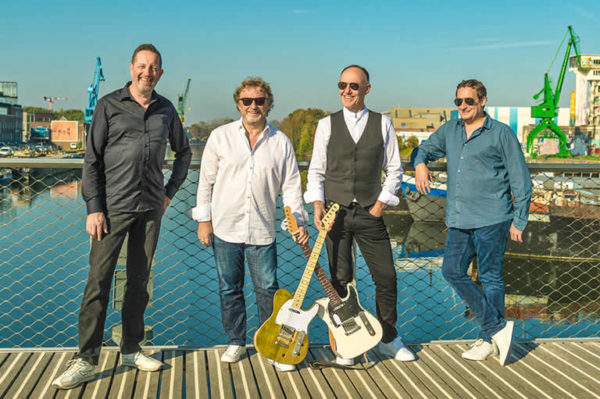 The story of the Belgian Quo Band started in the summer of 2004 after my father and I went to see a Status Quo concert at the “Schwungfestival” in Roeselare. My father, who has been a fan of Status Quo for many years now, was inspired by their music to start his own band.

I had found his old instruments hidden somewhere in the attic. One day, I installed them all and told him that I wanted to learn how to play Status Quo’s tracks. For a seventeen year old, who hadn’t played before and could not read music it was quite a bold statement that raised quite a few eyebrows. Nevertheless, I did not want to give in. With steady determination and day after day, I practiced the musical parts, which are not as easy as many may think, until I mastered them. It’s a commons misconception that the structure of the Quo’s tracks is simple. After weeks of practice, I had made much progress on my ‘guitar play’ and in the summer of 2004, I was ready to step into the spotlights. My father, having seen my determination and motivation, was keen to start playing again as well and we decided to form a tribute band.

Via Internet, we looked for a drummer and bass player to add to the band. For this kind of music it is of paramount importance to have a tight rhythm section. We soon realized that it would not be as easy as we had thought and that it would take several weeks, if not months, to form a band. In the meantime, we continued practicing every day all summer. There was still a lot to be improved. Even though we mastered the musical parts rather quickly it was difficult to combine and align the different sounds. But still, we were happy to be making steady progress. We were pleased with the level that we had achieved after the intensive rehearsals throughout the summer.

In October, out of the blue, we met Lieven, another Status Quo addict who happened to be a bass player. He introduced us to Johan, our soon-to-be drummer. We started rehearsals in December and did our first try-outs in Hertsberge and Maarkedal in 2008.
In 2009 we were finally up to speed thanks to birthday concerts, an “apéro” concert and we even appeared on AVS, a regional TV channel (see “Press” for more information).
2010 started with our first small gig. Unfortunately, after that, there were no more concerts on our schedule. It seemed that playing and rehearsing intensively with the same people for three years was starting to take its toll. As a result, we no longer had the same drive, motivation and energy as when we first started. My father and I had made our ambitions and aspirations clear from the start – it was our dream to play with the Belgian Quo Band at a huge event one day.
We soon found out that the members of the band did not all share those dreams which meant that it was difficult to stick together. Even though we were playing with two superb musicians, we realized that it would be difficult to achieve our goals, mostly due to the situation in the band at that time. After a long and difficult discussion, we came to the conclusion that it was better for the band to let go of the rhythm section.
By the end of the summer, the band was complete again and we were back on track with some performances at the end of that year. And yet… we felt that we did not have a match with our new bass player. Luckily, at the beginning of 2011, we received great news: we were thrilled that Lieven, who was pleased with the band’s new approach and style, decided to return.

We invested in new amplifiers, a new wardrobe and guitars in order to be more in line with the real Quo. In 2011, we had set new common goals. The new line-up with Erwin, Frank, Lieven and Leander started to pay off: we played at a broad variety of events and launched our first DVD (“BQB Live”) in November of that year. On top of all that, we opened the Tribute Festival at the “Brielpoort” in Deinze. We were hoping for an excellent start in 2012 as well – we even worked on an international breakthrough and were proud to add 3 concerts in the Netherlands to our tour schedule.

Unfortunately, Leander announced in January that he had to leave the band due to personal reasons, leaving us without a drummer once again.

We were lucky that Lieven immediately introduced us to one of his old palls, Wesley. After a few rehearsals, Wesley was able to convince us of his added value – we were on the road again! We started a new series of intensive rehearsals to further develop the band’s quality. This started to pay off by spring: the band’s team spirit and sound was better than ever.  We were prepared for an exciting and busy second half of the year starting in Bellem on 11 August.
And then something happened that no one saw coming. On 29 August, my father was rushed to University Hospital at Antwerp with a ruptured aorta. We had no other option than to cancel all upcoming shows. It gives me great pleasure to say that my father is recovering well and that we started practicing again in January. This line-up is the best we’ve ever had and I’m not coy about our ambitions. 2013 will mark the beginning of a new sound and increased visibility thanks to live sessions at radio stations across Flanders.

Will we be able to achieve our goals? Wait and see. Erwin “Rossi”