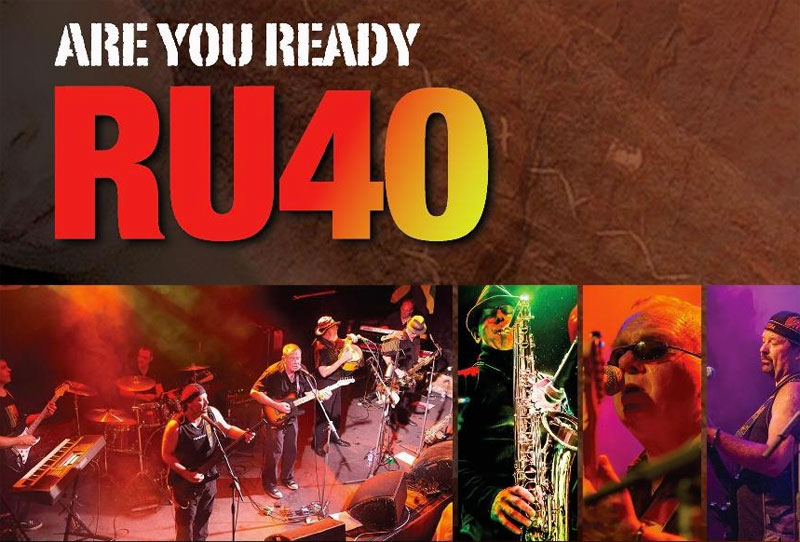 Playing all the classic hits from "Red Red Wine” to "Rat In The Kitchen”, from "Food For Thought” to "One In Ten” and beyond!  RU40 have headlined in major venues and festivals across the South, entertaining reggae fans and ensuring they sing along to "Cherry O”, "Homely Girl”,” Here I am Baby” "Kingston Town” and many more of UB40’s string of hits. In a very successful career, UB40 had over 50 UK charting singles and sold over 70 million worldwide. They had two No.1’s in the USA (Red Red Wine, Can’t Help Falling in Love) and toured the world. It takes a special group of musicians to authentically re-create the distinctive UB40 sound and the members of RU40 have many years of experience playing reggae and many other styles. The roots of RU40 go back as far as UB40 itself to 1979 when Danny Smith, Roy Brown and Martin Brisland formed Dub’allup – a very successful band that played original reggae and dub music. The initial band lasted till 1987 still reforming and playing at times over the years. At the turn of the new millennium it was decided to use their long experience of playing reggae music to play the UB40 songbook. RU40 has built a deserved reputation as an excting live band in its own right with charismatic lead singer Danny ensuring audiences dance and sing along to their favourite tunes. It is no exaggeration to say the Danny sounds more like Ali Campbell than the man himself! The RU40 line up comprises Danny Smith (guitar and vox); Roy Brown (bass and vox); Tim Smart (drums); Martin Brisland (keys); Andy Powles (keys, guitar and vox); Bogdan Dudzik (sax) and Julian Caesar (percussion and vox).